You never know how your day will go. My trip out to the beach yesterday was splendid, however. It was even better than I anticipated. I was able to make the drive out to the State Park in less then 15 minutes. The sand was still early morning cool as I trekked to the shore. The gulls were all sleeping. There were only three young men in the water and they had surf boards, which I wish I had and knew how to use. The waves were really spectacular, frothing and foaming as they crashed and roiled to shore.
I gave up the notion of swimming and happily dove amongst the churning waves, floating and bobbing as best as I could. I also saw an interesting thing after I came ashore to dry off in the slowly warming sun. At fist I thought the man that had arrived was simply trying to fly a kite. It was rather larger than I expected, but soon it became clear why that was. He was using that to catch the wind, so that he could hop on a board and was rapidly pulled out on the Big Lake. It was rather thrilling to watch.
It is definitely something I hope to try one day. It was also something I had never particularly heard of before. You just never know when or where you might learn something new. I like that life is like that. 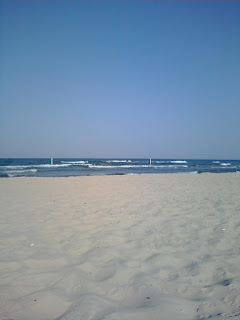