Somebody Pooped in the Dryer

This has been a strange time for all of us. We are having to do and say things we have never considered before. I thought last year had been a strange and difficult year. As a writer I like to think that I have an abundance of imagination.
Everything currently happening right now in our world is beyond anything I ever could have made up for a story. It is all humbling and distressing at the same time. Also, it is a wee bit discouraging as it shows just how much imagination I actually lack.
I come from generations of worriers, people that have imagined the worst for nigh on centuries. You would have thought I would have been better prepared for a pandemic and shelter in place rules. Apparently I have failed my legacy.
And just as things keep spiraling out of control and I think it cannot possibly get any stranger, it does.
I am finally at the point where I can almost laugh about this, so I figure it is time to share on the off chance it might provide a moment distraction and a wee laugh for someone else.
My husband and I both do laundry, each one chipping in as needed. We tend to not necessarily empty the dryer in the most timely manner once a load of laundry has been dried. He tends to quickly just grab a shirt for work out, as needed, while I tend to grab it all out and set it on top of the dryer, always intending to sort it as some distant future date that never arrives.
Every once in a while he will grab a shirt out and not snap the dryer door shut. We have five rescue cats, two of whom are really quite elderly now. I am always afraid one of the cats will think that load of clothes looks cozy and will try to jump in the dryer for a nap and then the door will shut and they will die of suffocation or something, fright or annoyance, maybe??
It turns out I was worrying about totally the wrong thing.
About a week ago I went to the laundry room and found the dryer door hanging open. I grabbed out all the laundry and tossed it on top of the dryer after I grabbed the shirt out that I wanted to wear to work that day. Yes, I am still able to go to work since I work in logistics and deal with the moving of feed. I even have my document to carry with me in case I need it, to prove I am an essential worker.
I hurry to get ready for work and fly out the door. It does help that there is now minimal traffic for my morning commute AND that it is much shorter commute than when I was working in downtown GR the past few years.
I get settled at my desk and as I am working along, I catch a whiff of a strange odor. It almost smells like when they are fertilizing the fields near by with manure, but I know it is not right time for that. It can't be me. I took a shower and my clothes were fresh out of the dryer.
At least there is no one else from my team in the office and the rest of the people working are at desks that are too far away to get this strange whiff every now and then too.
After a long day, I am finally home and feeling slightly ambitious still. I head to the laundry room to fold the clothes. And that is when I find it. It is smeared in one of our older hand towels. When that dryer door was open, someone did crawl inside. Maybe they even took a nap. They certainly did not get trapped. The one thing they did do was somebody pooped in the dryer.
That was about the final straw. I howled. I took the towel and tossed it in the garbage. I sifted through all the laundry. That was the only contamination, the only point of physical contact. It was just the smell that permeated all the rest of the clothes. I got the bleach and sanitizer to clean out the dryer of any lingering odors. I took all the clothes, including the clothes I had on, and through them in the washer again. We normally only use cold water. Not this time.
I had a nice chat with my husband about how we need to change our process so this NEVER happens again.
I hope everyone is staying safe and healthy during this time of quarantine. I also hope that none of the rest of you will every have to say that somebody pooped in the dryer. 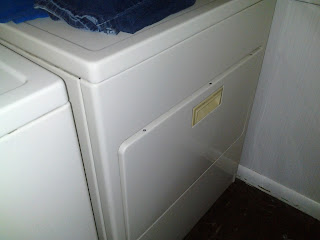