Afraid of Being Typhoid Terri

You might think I would be used to this, that sensation of minding your own business, floating through your daily life just intent on surviving, and then life throws dozens of curve balls at you at once. But, nope, you never really get used to that. Some of those past curve balls have somewhat prepared me for this time of shelter in place and quarantine, though.
For quite a few years I helped take care of my grandma, after my grandpa died. She was really quite healthy and independent and could do most things for herself as long as it didn't require being able to see. She had macular degeneration. I used to drive her to the grocery store, take her to church, and help with some of the chores around her house.
After a few years, she needed a little more assistance, so I moved in with her. She was a great roommate. I have lots of rather comical stories about our time together, before it became clear she needed more care and had to eventually move to an assisted living facility. Sometime I will share some of those humorous tales with you.
One of my constant fears back when I was helping her was that I might bring some horrible flu home to her or some other illness. I was always afraid of becoming Typhoid Terri, the girl that killed grandma. That was when I started getting flu shots and taking vitamins, doing the little things I might have scoffed at if it was just a matter of self care. When it came to looking out for the best interests of someone I loved and someone that might be more vulnerable than me, it was an easy choice to do little things like stay up to date on my immunizations and buy the vegetables and things with better nutritional value, not just the corn chips or potato chips I might prefer.
Now, as a society, we are living with even greater uncertainty with this virus that can be so easily spread. What is the best way to react to it? What precautions should people take? How much is too much? How much is too little?
This time around, it is not grandma that I am looking out for, this time it is my own father. He was very ill last year because an injury to his foot ended up massively infected. It was a long, arduous process to help him re-gain his health. The doctor initially wanted to amputate a portion of my father's foot. Understandably, my father was very much against that. He is so much better today than he was last year just about this time. BUT-he is still more vulnerable than other people. He is over 80 years old, he has high blood pressure, and we will always have to take great care of his feet and legs due to peripheral artery disease and his illness last year.
Then there is my mother. She has had a myriad of illnesses since I was a very young child. She now finds herself in the difficult spot of maybe having a bone marrow or blood disease. It has been hard to diagnose. She was hospitalized twice so far this year, needing fluids and blood transfusions both times. The second time she was in the hospital was in March, when things were beginning to be locked down. She has had to miss her regular doctor appointments and her bone biopsy was put on hold due to the fact that she is considered immuno-compromised.
I work in an essential industry so I am able to go to work still. I also am the volunteer tribute for my household and my mother's in regards to going out to do grocery shopping, get prescriptions, and mail out the bills that still come in even when the whole world seems to be on a lock-down. I wash my hands as if I have OCD. I keep hand sanitizer and general sanitizer at my desk at work, in my car, and in most rooms at our house.
And yet, there is still that creeping fear that I will end up being Typhoid Terri, the one who killed her parents. So, that is why I wear the mask, even before it was required. I already learned long ago that sometimes you do things that you might not think you need to do, so that you can protect those that need a little more extra care than you think you need. Do I feel silly wearing a mask? Sometimes. Do I feel restricted by the shelter in place? Sometimes. Could I live with myself if I didn't think I was taking every precaution I can possibly take to protect some of the most valuable and vulnerable people in my life? No, never. This is why I wear the mask. 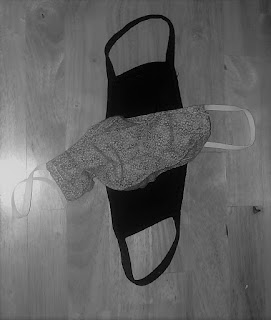