I never asked. It's as simple as that. I don't know why I never asked him. Now, I sure wish I did. It just never occurred to me. Maybe it was because for me, they were never "real" people, more like historical figures in the stories of our lives. I wish I would have asked my dad about the loss of his own parents.

If I would have asked him about it, he might have had some great advice on how to navigate such a loss. I was two when my dad's mom, my grandmother, passed away. I don't personally have any memory of her. I "think" I remember sitting sitting on the stairway landing of her house, playing with some toys I never saw again. I can see golden sunshine pouring through the curtains on the windows and the way it looks like there are pixies dancing in the air. My cousins have told me she was the best grandma ever. They adored her. They say she adored me.

His dad, my grandfather, died several years before my dad even met my mom. I never felt any particular connection until one day, when I was twelve, I went to visit my best friends grandparents. As she introduced me to her grandfather he said he he knew exactly who I was, that I was Ralph Rowe's granddaughter. Suddenly I received one of the greatest gifts in my life. For one brief, shining moment my grandparents were vivid and real, connected with me in the here and now.

My dad would sometimes tell little stories about his parents, from when he was a child. He spoke about the time his mother had a fight with her own brother. My dad was a wee child. He remembered there was a violent storm out that night. He was playing with his cars under the kitchen table while his mother sorted out a situation with her brother. He remembered it felt like Night on Bald Mountain could have been playing in the background. His mother was fierce and did not backdown, she stuck up for herself, that was who she was.

When my dad was grown, he took his mother on a cross country road trip. Among other sites they saw when they reached California, was San Simeon, the Hearst castle. It was an epic road trip that my dad would sometimes mention. They both enjoyed themselves very much.

I think my dad was as close to his mom as I was to him, maybe even closer. I don't know. He never really talked about that loss, ever, as we were growing up. He would just tell small stories about his parents lives when they were pertinent to whatever was going on in our own lives.

I just wish I would have known or thought to ask about it, so I could have known them a little more, known him a little better, and have a memory of his words to guide me through this loss of him now in this physical world.

We did take his cue a bit last night and included a few stories about him, some humorous, in our New Year's Eve conversations. In that small way we were able to carry him into this new year with us. 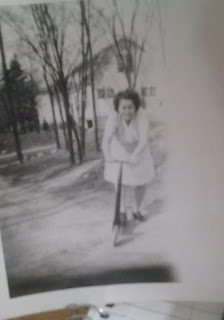