A few weeks ago I saw another story about an amazing child that managed to save someone's life. This time a little girl, practically a toddler, managed to use her daddy's phone to call her mommy. Somehow the child was able to select the correct app, swipe at it, and put a video call through. All this was done even though no one had explicitly shown the child how to do this. Ever.
The mommy was at work and suddenly receives sobbing call from little girl that daddy has fallen down. The father, a man in his late twenties to maybe early thirties, was actually having a stroke. He had no known health history issues prior to that moment.
Due to the child's call and the intervention of some close neighbors, the father has survived this health crisis and is now in recovery and rehabilitation. The heroic young child saves the day and her daddy.
I was never one of those types of children. Early on, I had the chance to display the same type of heroics, the same opportunity to put myself on a successful trajectory. According to family lore, I did nothing of the sort. What follows rather explains the sum of my existence.
I was about two and a half at the time. I don't really have any clear memories from that age. My paternal grandmother died that year. I have no real recollection of her, just the images and remembrances provided by others. That is also what this story is, a re-telling of other people's old memories.
My father was at work. He tended to work long days, double shifts, on the days he was not also in school working on finishing his bachelor's degree with his GI Bill Funding. It was just me and my mom in a tiny ranch style house with avocado green aluminum siding. It was the seventies after all. We lived on a corner lot in a developing subdivision, so there were really no close neighbors at the time.
If I had cried about my predicament, there would have been no one to hear my tears. I am sure I would have at sobbed first as I tended to be a bit of a cry-baby.
Apparently my mother had a bit of a health issue one day. She fainted and then must have hit her head on the edge of the dresser in their bedroom. She was out cold until my dad got home from work that night.
I discovered the issue when I must have gotten hungry and went looking for her, abandoning my toys in my playroom and toddling off in search of her. It appeared that I found her, pulled at her, and tried to wake her, but nothing worked.
Clues of my movements that day are how the story was pieced together. One of my toys was found by her side and I had apparently put one of my blankies over her, maybe thinking she was suddenly taking a nap.
Did I then try to drag a chair to the old wall mounted avocado green phone that matched the avocado green kitchen walls? Did I try to run for a neighbor or summon a neighborhood collie to collect the sheriff for help? Nope, not this kid.
I did manage to pull open the door of the, yes, you guessed it, avocado green fridge. I managed to get out the single wrapped slices of cheese, buttered some bread, and made a sandwich. I also apparently was very thirsty and pulled out a bottle of orange pop that had a stopper in it.
When I pulled that stopper, boom, sprayed all over the ceiling. It was the pop still dripping from the ceiling and the trail of scrunched up cheese wrappers that helped show how I occupied my time until my dad got home from work that day.
I have no idea what was done to help my mom, how I was comforted, or what happened after he got home that day. The telling of the story always ends there, with the moral being that at least I didn't starve. I knew enough to feed myself, if not to go for help.
And that is sometimes how I still roll to this day. At least I generally know enough to get food. Also, now days it would be seen as, you have to help yourself first, then you will be in better shape to help someone else. Get on your own oxygen mask, then help the next person. At least that is what I tell myself when I hear this story re-told at some family gathering. 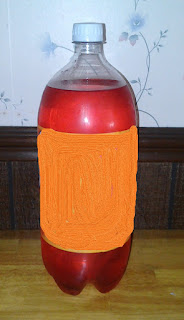