This past weekend, I had the pleasure of taking a road trip with my father. It was part of a belated Father's Day gift. He had been talking for a long time (a few years) about driving up to check out the property and cottage that had belonged to his grandparents and then his mother until around 1971.
I had meant to make the trip with him last fall, last summer, even two springs ago. Time just has a way of sneaking by us. Then, this past May, my mother ended up in the hospital. At first it seemed to be not so bad. It was a bit scary. She had a pretty bad pneumonia, but that is what antibiotics are for, right? After a long week, she was finally released to go home, but with more medications and supplemental oxygen that she has to have 24/7.
Suddenly I was forced to realize that time has been marching rather rapidly over us all. What would have been a simple endeavor, to go on a road trip for the afternoon, was going to take some strategic planning. My desire to take this trip had only multiplied after realizing how random life can be. One minute you think you have a simple cold, then you realize you have pneumonia, and the next thing you know you are dealing with the fact that a person's heart is too worn out to cope with such illnesses.
Fortunately, my husband is the caring sort and he rolls with what ever odd requests I have had over the years. I told him of my plan to take my dad for a drive and explained how my husband would need to be on duty as sort of sitter, to ensure nothing went wrong with my mother's oxygen tank. My husband readily agreed.
Then it was just a matter of explaining the idea to my parents, printing up the maps, and hoping the best with the weather. I have no air conditioning in my car and the temperatures have been scorching here in south west Michigan for the last several weeks.
The Saturday of our trip dawned hot and dry. My father and I first toddled over to the local farmer's market to get fresh fruit for my mother and snacks for my husband. Then we got some lemonade for ourselves and started off on our journey, to revisit his happy memories and for me to learn about he family I never knew, his parents. His mother died when I was two and his father died long before I was born.
The lack of air in the car was not a real issue. It made the trip up to the cottage seem more like any trip my dad would have taken with his family in the early fifties, as they didn't have air either. It made it all seem more authentic and real.
My dad spent the drive up telling me stories of how his grandpa bought he land in 1939 and built the cottage about then. How it was passed to his grandmother in 1946 when his grandpa died. He then told me how his mother inherited it after her mother died.
He told me a lot of stories, he made my grandparents and uncle live for me again. I was also able to clearly see him as the boy he had been. One of my favorite stories involved the time when my uncle (16 at the time) let my dad (12 at the time) drive his car into the driveway at the cottage. My dad couldn't see over the dash and had trouble controlling the big old 1937 Ford my uncle had refurbished that summer of 1951 and ended up running into the porch. My dad mentioned how he took off the corner of that cement porch. Their family had never fixed it.
After just over and hour, we reached our destination. We weren't sure. Things change over time. There was a building that appeared to be the right place and it was on the right small back road. Fortunately, there were some folks sitting outside their trailers next door. we got out and asked them a few questions. It turned out that they had bought some of the property back in 1971 and could confirm that the cottage we were looking at was the original one built in 1939. It has been remodeled some but we were able too look around.
We took several pictures. One of my favorite ones was of the front porch steps. There is still a chunk missing. Even though it happened 61 years ago, my dad had made his mark. It was just such a great moment to add this confirmation to the wonderful stories I learned that day as I took this trip down memory lane with my father. It was meant to be a gift for him, but it was also such a fantastic gift for me! 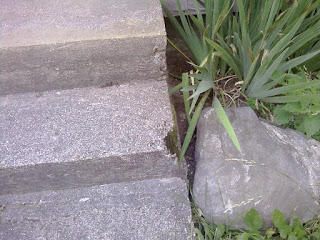