I'm not a classic hoarder. I don't care for the clutter of physical things. I tend to take after my mother's mother. I will throw things out, even if I think there is a possibility I will need them later. When we bought our house, I avoided getting much in the way of furniture for as long as possible. I adored all the empty space. But when it comes to stories, thoughts, emotions, memories-I hold onto every single one, even ones that might seem pointless.

Why do I do this? I suppose it is some attempt to try to sift through information and make things make sense, to try to understand the why and how of everyday life. We have had a bit of a traumatic summer, even more so than the usual difficulties brought on by a world wide pandemic.

As my dad said, shortly before he had to have spinal surgery to remove a mass from his spinal cord and get his spine rebuilt, he was just eating his cheeseburger, minding his own business, watching one of his shows on History channel, until suddenly, he wasn't.

Suddenly we were calling an ambulance, rushing from one hospital to the next, he was undergoing hours and hours of testing, and we were receiving potentially grim information. Massive amounts of medication became necessary to combat pain and the muscle spasms of an unruly nervous system that was overtaking his body. Soon, he was in surgery for 6 hours one day, then 9 hours the next.

During the days of pretesting and surgeries, he slipped further and further away. The medications caused a deep fog to settle over him. Most of his thoughts and conversations turned either inward or were with people that I could not see. Anytime he touched down in our shared reality, I would cling to any words he said, storing them away in my heart and mind, my precious hoarded treasures.

The few minutes before the sedation process began before his big surgery, is when he said, "It's been a good run. Look after your mother." These words left me cringing, wishing he would not say that, as it is no easy task to honor, for a variety of reasons.

And then he emerged, almost 12 hours later, and was so upset, due to being in even more pain, Pain we thought would be gone, that the surgery would fix. And that was the last coherent moment before he slipped away completely. And his words were full of pain, hurt, and anger over his predicament. Words I wanted to forget, but also held close, replaying whenever they crept to the front of my mind.

And then, just nothing. Nonsense. Ramblings. Incoherence. Kind words from care givers that mean well, he doesn't mean what he says. Sometimes they never come back, sometimes the delirium is permanent, you just never know.

Separation due to quarantines and rules about interactions with those in care facilities, loss of time, and for him, further loss of self.

Another hospitalization, but at least I can see him. He still knows I am his daughter, but for how long? The next day, the same results, fog, sleep, and fading thoughts.

And then, oh glorious day, I walk in his room and he is sitting up in his bed. His doctor notices right away the change of mood when dad sees me. He notices dad is instantly grounded in the moment in a way he has not been in over a month.

Dad starts talking about his woes which leads him to the lyrics of Old Man River from showboat, so he sings me a verse or two. This leads him to telling me about the time he went with his parents and older brother to Chicago to see the show. He says they rode the train his grandpa Kelly was the conductor on. I know this is true, he has told me this story before. I know it is a real memory, a real piece of him that has come to the surface.

My heart soars as it is filled with hope. I know this doesn't mean he is cured, that everything is fixed, but it is a hopeful moment, words to cling to and treasure. I am so grateful to hear my dad tell me one more story. 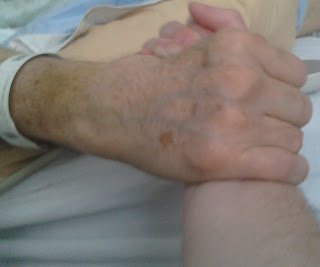